Imagine 2050: In Seven Days You Can Help Defeat Anti-Immigrant Bigotry

Eric Ward, from Imagine 2050 blog, consistently produces some of the edgiest and most insightful content in the pro-migrant blogosphere. Yesterday, he outdid himself. In an action-oriented post, he outlined 7 ways to “defeat anti-immigrant bigotry”. So, everyone who reads this post must do the following (and since its Tuesday, I’m asking you to double-up and take on Monday and Tuesday’s task today – I’m sure you can manage!).

MONDAY: Email this blog to six other people who you think might be interested. Write three short sentences telling all of them why you will be participating. Ask them to participate too, and reply to your email letting you know either way.

TUESDAY: Remember all of those times when Fox News host Glenn Beck made bigoted statements about immigrants? Beck may choose to forget but let’s show him we haven’t. Beck is responsible for much of the anti-immigrant sentiment that has spread around the country. Over thirty companies agree with us and have stopped running their ads on the Glenn Beck show. Let’s help Color of Change get the message out even more. Go to http://www.colorofchange.org/beck/ and add your name!

WEDNESDAY: What can I tell you about Lou Dobbs that doesn’t already disgust you? Dobbs has falsely accused immigrants from Latin America of spreading Leprosy in the United States. When he got caught in his lies he simply lied again. CBS’s 60 Minutes didn’t buy his racist lies and neither do we. Now Media Matters is telling us that Dobbs will be participating in a national event organized by the Federation for American Immigration Reform, a known hate group according to the Southern Poverty Law Center. It’s time for CNN to take responsibility. You can read the short media release by clicking here. Now, go leave a comment for CNN President Jonathan Klein at http://edition.cnn.com/feedback/forms/form1.html?35. Tell him that you read the letter Media Matters sent to him, and you demand that he respond. Let Klein know that you are disgusted that CNN is willing to use bigotry to generate profits.

FRIDAY: Anti-immigrant Maricopa County, Arizona Sheriff Joe Arpaio has been terrorizing members of the Latino community and their allies in Arizona under an agreement with Homeland Security Director Janet Napolitano. America’s Voice points out the Napolitano, appointed by President Obama, could stop the insanity at any time with a single stroke of her pen. People have died under his custody, he has raided the offices of a newspaper that exposed his brutality, and he marched Latinos down the middle of the street in chains. Click here at the website of America’s Voice and send a message to Napolitano that “enough is enough!”

SATURDAY: Take five minutes to call a friend or family member. While catching up on the latest, be sure to spend five minutes telling them what you did this week to take a stand against anti-immigrant bigotry.

SUNDAY: Send me an email at imag2050@gmail.com. Let me know what happened and how it went!

And I’m adding one last action to take – text JUSTICE [JUSTICIA for Spanish} to 69866 and join the Cell Phone Action Network. We will send you news and alerts so you can be at the frontlines of the fight for immigration reform.

Groups fight “more of the same” on immigration

Last week, amidst growing frustration from immigrant rights groups and advocates, folks from FIRM groups in New York (NYIC) and Los Angeles (CHIRLA) took to the streets to protest the expansion of Bush-style immigration policies and legislation. While many of our groups (FIRM included) looked to the Obama presidency as a “New Day” for immigration, the reality of recent weeks has worn patience thin. The New York Times ran a story this week, highlighting the growing discontent and impatience.

First, there was the expansion of E-verify – a fatally flawed electronic verification system that threatens not only American workers but immigrants caught up in the endlessly bureaucratic immigration system. Then, there was the expansion of the 287g program – which gives local law enforcement the ability to enforce federal immigration law and is rife with racial profiling and abuse of power.

To be frank, we were promised a “new day” and we feel like we are seeing more of the same.

“We are expanding enforcement, but I think in the right way,” Janet Napolitano, the homeland security secretary, said in an interview.

There is no right way to expand flawed systems. They are just that; flawed. Of course enforcement has to be a part of a Comprehensive Immigration Package, but it should not be expanded outside of an entire overhaul of legislation. As Katy Vargas at ImmPolitic blog wrote:

There is a desperate need for broader oversight of our immigration policies. Escalating enforcement without reforming our immigration system comprehensively only exacerbates the problem and it will not render long-lasting solutions to our immigration chaos.

Last week, America’s Voice launched the “Enough” campaign, calling on the Department of Homeland Security to push for Comprehensive immigration reform, not an expansion of flawed and abusive programs. If you haven’t signed the petition yet, do it NOW. (Sign petition here)

President Obama promised a new day for immigration policy in America, but we have yet to see sufficient change coming from DHS. Rather than overhaul misguided Bush-era immigration enforcement strategies, DHS continues to pursue policies that have done little, if anything, to solve the crisis of illegal immigration.

These policies continue to increase fear in our communities and undermine public safety at a time when the nation is waiting to hear your plans for advancing real, comprehensive immigration reform.

While, on a personal level, I have been very disappointed with the recent moves from the administration (especially the expansion of 287g), I still have faith that the President is ready and willing to bring sensible solutions to the table to help fix our broken immigration system. I firmly believe that we need to keep up the pressure and make our voices heard in order to push for this. Obama (and the United States for that matter) can’t afford to not succeed on this issue.

Today’s New York Times has a powerful editorial on immigraton enforcement under the Obama administration. Using the exmaples of Saturday’s peaceful protest against Sheriff Joe Arpaio and last week’s unexpected immigration raid in Bellingham, WA, the piece picks apart the notion that Bush-era enforcement-only tactics can somehow solve the immigration issue in this country.

Americans who might applaud any crackdown on illegal immigrants, particularly in a recession, should know that scattershot raids and rampaging sheriffs are not the answer. The idea that enforcement alone will eliminate the underground economy is a great delusion. It runs up against the impossible arithmetic of mass expulsion — no conceivable regime of raids will wrench 12 million illegal immigrants from their jobs and homes.

The country is not a safer or better place because one more business and two dozen more families are torn apart outside Seattle or because Sheriff Arpaio has much of Maricopa County terrified. The system under which illegal immigrants labor, without hope of assimilation, is not any less broken. A new report from the Government Accountability Office shows that federal oversight of the 287(g) program has been sorely lacking.

So, a question: Are Mr. Obama and Ms. Napolitano in charge or not? Let them show it by ending the raids and Sheriff Arpaio’s abuses. Something has to be done about immigration, but it has to be smarter than this.

We have been saying for years that not only is 287(g) ineffective, but it is costly to communities, who experience a heightened sense of insecurity and fear under the program. Well, now the GAO is coming out and saying basically the same thing.

The report, to be released Wednesday by the Government Accountability Office, the investigative arm of Congress, says the government has failed to determine how many of the thousands of people deported under the program were the kind of violent felons it was devised to root out.

Some law enforcement agencies had used the program to deport immigrants “who have committed minor crimes, such as carrying an open container of alcohol,” the report said, and at least four agencies referred minor traffic offenders for deportation.

Homeland Security Secretary Janet Napolitano has already ordered a review of the program. A top official at the Immigration and Customs Enforcement agency is set to testify at a Congressional hearing on Wednesday.

The ineffective program is yet another symptom created by the lack of Immigration Reform at the Federal level. When Federal laws are pushed off onto local entities for enforcement, you are bound to run into issues. This is a Federal problem and should be dealt with as such.

Again (and I feel like a broken record here, people) this draws even more attention to the NEED FOR COMPREHENSIVE IMMIGRATION REFORM. The system is broken and no amount of manuevering at the local level can fix it. Immigration Reform must be passed, and soon.

Last Wednesday, Immigration and Customs Enforcement agents raided an engine remanufacturing plant in Bellingham, Washington, ignited a quick and fierce outcry from immigration rights advocates and communities across the country. We responded and the administration listened.

The day after the Raid, after thousands of calls into the White House and meetings on the Hill, Janet Napolitano called for an investigation into the raid.

Napolitano told lawmakers during a hearing in Washington, D.C., on Wednesday that she did not know about the raid before it happened and was briefed on it early Wednesday morning. She has asked U.S Immigration and Customs Enforcement, which arrested 28 illegal immigrants in the raid, for answers.

“I want to get to the bottom of this as well,” she said. She said work-site enforcement needs to be focused on the employers. 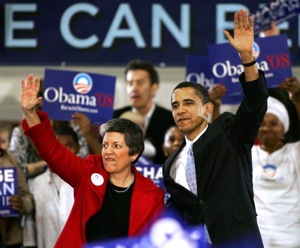 “Secretary Napolitano is conducting a thorough review of ICE, including enforcement,” Mr. Shapiro said. “The president believes we must respect due process and our best values as we enforce the law. The real answer to our broken immigration system is to fix it. The president has said that we will start the immigration reform debate this year, and this continues to be the plan.”

There you have it folks. We yelled and the administration answered. It looks like immigration will be on the agenda this year. Lets hope Obama keeps his promise to get the ball rolling on Comprehensive Reform; because if he doesn’t, we will be here to keep up the pressure!

On Monday, Janet Napolitano named Esther Olavarria as the Deputy Assistant Secretary for policy, a role that will focus on immigration. We applaud Napolitano’s choice of Olavarria, who worked closely with Sen. Ted Kennedy to fight for immigrants and was a major architect of  comprehensive immigration reform efforts in recent years.

Esther Olavarria brings nearly 20 years of experience on immigration policy to her new job at the Department of Homeland Security. Most recently, she was a Senior Fellow and Director of Immigration Policy at the Center for American Progress, where she was responsible for planning, developing and administering the organization’s work on immigration issues, with a principal focus on policy and advocacy strategies on comprehensive immigration reform; planning and convening roundtables and other venues for discussion, and conducting research and write on immigration issues.

Also, on Monday, Obama tapped John Morton to be the Assistant Secretary for Immigration and Customs Enforcement. Morton is a career prosecutor with lengthy experience in immigration enforcement and criminal prosecution.

Yesterday, the new Secretary of the Department of Homeland Security, Janet Napolitano, was on NPR discussing her vision for immigration policy in the new administration.

As governor of the border state of Arizona, Janet Napolitano was on the front line of the immigration debate. As the new secretary of the Department of Homeland Security, she inherits a department that was recently blasted by the nonpartisan Migration Policy Institute. The New York Times called the institute’s scathing report a “portrait of dysfunction.”

Listen to the full story here.