But More Must be Done on Comprehensive Immigration Reform

The Fair Immigration Reform Movement (FIRM) applauded President Obama for renewing his commitment to comprehensive immigration reform and the DREAM Act in his State of the Union Address tonight, and also praised his administration for progress made to provide administrative relief for immigrant families.

“The President is clearly committed to comprehensive immigration reform that values families. We hope that Congress, with comprehensive reform stalemated for now, will not waste any more time and pass the DREAM Act,” said FIRM spokesperson Rich Stolz. “Since last summer, in the absence of Congressional action, the Obama administration has used its own legal authority to try to make the immigration system more sensible and humane, and the Administration must follow through on the promise of these reforms. However, our broken immigration system will remain broken until there is comprehensive reform.”

Obama’s commitment to passage of the DREAM Act was evident in the choice of former DREAM student Juan Jose Redín as one of the First Lady’s guests at the State of the Union address. Redín, born in Mexico before emigrating to the United States with his mother and sister at the age of 10, is now a successful attorney in California. Like many other DREAM students, Redín endured many challenges as he worked toward his goal to higher education. Under California Assembly Bill 540, Redín was able to enroll at UCLA where he received both his undergraduate and law degrees. Redín is now a U.S. citizen.

Unfortunately, Republican lawmakers, including GOP Presidential candidate Mitt Romney, have publicly stated their opposition to the DREAM Act and to other legislation that would lead to comprehensive immigration reform. Romney has said if elected, he would veto the DREAM Act. 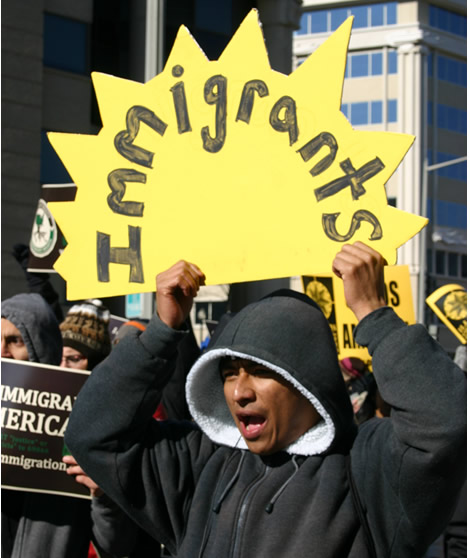 Immigration rights groups and Rep. Luis Gutierrez (D-IL) said the Obama Administration’s decision to suspend deportation proceedings for law-abiding immigrants is a step in the right direction but more must be done to achieve true immigration reform.

A national conference call was held Tuesday night in English and Spanish to spell out exactly what the administration’s new deportation policy means for immigrants. Rep. Gutierrez, the Fair Immigration Reform Movement, Reform Immigration FOR America, the Coalition for Humane Immigrant Rights of Los Angeles, United We Dream and others participated in the call.

“I will not stop with this announcement. Let’s keep working to get immigration reform and help more people and benefit our nation,” Rep. Gutierrez said on the call.

David Leopold, President of the American Immigration Lawyers Association, emphasized that the policy does not grant amnesty or allow for work authorization. He and Rep. Gutierrez warned immigrants to be wary of unscrupulous lawyers who try to take advantage of immigrants.

Gutierrez will be launching a nationwide information campaign to explain what the policy means. He hopes the campaign will help educate immigrants on the U.S. legal system and how to navigate it without being duped.

Angelica Salas, executive director at the Coalition for Humane Immigrant Rights of Los Angeles, reminded listeners to continue to tell Obama that change takes courage and to call the White House at (866) 998-2910 to thank him for this policy decision.

“We must thank the President and ask him to do more, but we must also defend this victory and keep ICE accountable,” Salas said. “We must ask for proof that these new guidelines are implemented and that fair, just and humane immigration policies continue to be approved.”

Finally, Progress! But the Work Continues.

Last week marked a big step forward in our fight for fair immigration rights in this country. But although the Obama Administration said it would halt efforts to deport immigrants currently in deportation proceedings who have not been accused of serious crimes, including DREAM students, we still have a lot of work to do.

We encourage you to thank and support the Administration’s decision by calling the following numbers to the White House:

We must remember that Republicans will try more than ever now to stifle the promising hopes of the new policy. That’s why we need as many pro-immigration voices to be heard, so please call the numbers above.

Under the new policy, the Department of Homeland Security will individually review pending deportation cases and categorize them into low-priority or high-priority divisions. This means that immigrants who pose no threat to public safety will get the opportunity to remain in their adopted country.

This was originally posted in the blog of the Campaign for Community Change.

President Talks with CEOs on Immigration; Activists Ask for Action

President Obama today met with stakeholders to discuss a way forward on immigration reform. Getting the President’s time on immigration is great, especially when so many other pressing issues are competing for his attention. We’re glad the long overdue meeting happened. However, critical voices were absent from this meeting, voices that echo the experience of so many immigrants who make up our community and are directly impacted by our broken immigration laws.

Missing from the meeting were people like Victor Reyes, a father of 5 whose wife was deported because she missed an appointment. Also absent was Freddy Gutierrez, who lost his wife and 2 young children to deportation. He only stayed in the U.S. because this is where he has a good job that allows him to provide for his family.

END_OF_DOCUMENT_TOKEN_TO_BE_REPLACED

Words from Deepak Bhargava, Executive Director of the Center for Community Change.

On Saturday, December 18th, the U.S. Senate failed to get the 60 votes necessary to move forward on the DREAM Act, a piece of immigration legislation that would provide a pathway to citizenship for millions of undocumented youth in this country. Where do we go from here?

Saturday’s vote may have been a legislative setback but it was not a defeat for our movement.  We won a majority of votes in both the House and the Senate.  But because of a Republican filibuster we needed 60 votes to pass DREAM and we fell short.

We thank those who did the right thing and voted for DREAM.  But for the majority of Republicans and the handful of Democrats who voted against the best and the brightest of the Latino, Asian and immigrant communities, we know who you are, and we will never forget.  Today you told young people who grew up in America, who did nothing wrong and everything right, that their talents and contributions are neither welcome nor respected.

As disappointed as we are in those who slammed the door of opportunity on talented young people who are Americans in all but paperwork, we are buoyed by the nationwide outpouring of support for this cause, the unprecedented mobilization in support of DREAM, and the support from allies from the faith, labor, education, civil rights, military, law enforcement, local elected officials, and business communities.

This mobilization was and is led by the tens of thousands of DREAMers, the brave women and men who organized in their local communities to insist on making their DREAM come true, and by the hundreds who came to Washington DC over the past few months to serve notice that they are going to keep fighting and keep getting stronger until justice is done.  In addition, our campaign generated millions of calls and faxes and thousands of local events in every state.  This builds on the unprecedented mobilization of immigrant voters in the 2010 election, which resulted in anti-immigrant candidates being defeated and the Democrats maintaining control of the Senate.  All of which builds on years of fighting, organizing, mobilizing and educating which is building for our movement political power and policy influence as never before.

Where do we go from here?

END_OF_DOCUMENT_TOKEN_TO_BE_REPLACED

Have you called your Representative yet?

People like Soo Ji Lim are in favor of passing the DREAM Act. Though she will not likely meet the age requirement of the DREAM Act, her younger brother would be eligible. Soo Ji has overcome numerous difficulties in her life, including the loss of both her parents to terminal illnesses, in order to make ends meet and go to college.  Listen to her story here:

Tomorrow: Vigils for the DREAM Act 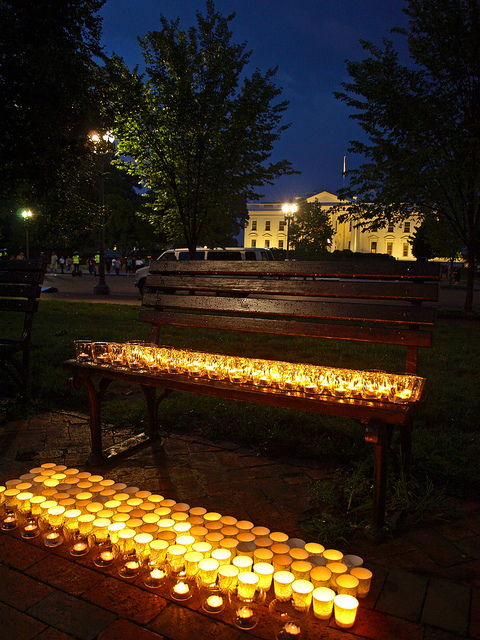 With a vote on the DREAM Act expected to come as early as Wednesday, grassroots groups throughout the country are organizing vigils Tuesday night to show their support and solidarity with DREAMers everywhere. Candlelight vigils are being planned in California, Washington, Kansas, North Carolina, Michigan, Illinois, Ohio, New York, Arizona, Oregon, New Mexico, Colorado, Iowa and other states.

“The grassroots immigration movement will do everything possible to show in no uncertain terms the benefits, popularity and moral urgency of the DREAM Act.  Already we have helped direct tens of thousands of calls to congressional offices, and will continue to make calls. Tuesday night we will bring people together to congregate with others who are similarly anxious, hopeful and excited about the upcoming vote. We’ve waited for this day for a long time.”

The DREAM Act is a bipartisan bill that would enable undocumented young people who came to the country as children to enlist in the U.S. military or attend college on their way to becoming citizens. The vigils are meant to show the power to call for a successful vote, thank those who are leading on DREAM, and ask those uncommitted to put aside politics, and do what is right for youth and our economy when they vote.

Some of the vigils being planned for Tuesday, December 7, 2010 include (all times are local):

But continue to call your elected officials and tell them to vote YES on the DREAM Act.

As a vote on the DREAM Act looms closer, grassroots groups who make up the Fair Immigration Reform Movement (FIRM) are stepping up efforts to show their Congressional Representatives that their communities urgently want the DREAM Act to pass. From California to Maine, immigration activists are flooding congressional offices with calls, faxes and emails, holding press conferences, staging caravans and rallies, and writing letters to the editor.

If you haven’t already, dial 866-967-6018 and we will connect you with your Representative. Tell them to vote YES on the DREAM Act.

FIRM, for those of you who don’t know, is a coalition comprised of more than 200 of the country’s largest and most active state and local immigration advocacy groups representing nearly every state. FIRM’s organizations are all actively courting the support of their Congressional Representatives and communities with varied and creative actions. In Wisconsin, activists with Voces de la Frontera were arrested during a vigil at Rep. Paul Ryan’s Racine office. In California, activists with the Coalition for Humane Immigrant Rights of Los Angeles (CHIRLA) are caravanning through the state asking for commitments of support from the state’s representatives. In Illinois, the Illinois Coalition for Immigrant and Refugee Rights is gathering signatures of support from presidents of universities.

Connect with these groups today and join them at these events.

Tomorrow, the House of Representatives will vote on the DREAM Act, a piece of legislation that would provide a pathway to citizenship for millions of undocumented youth.

Dial 866-967-6018 and we will connect you with your Representative. Tell them to vote YES on the DREAM Act.

Listen to stories of undocumented youth from the We Are America stories project:

The DREAM Act enjoys strong support across party lines. In fact, 66% of voters support the DREAM Act. And according to a 2010 study by the UCLA North American Integration and Development Center, the total earnings of DREAM Act beneficiaries over the course of their working lives would be between $1.4 trillion and $3.6 trillion, all taxable income to support America’s sagging economy. The bottom line is that our nation benefits from retaining the skills and talent of these youth and the majority of Americans understand this.  It just makes sense.

Dial 866-967-6018 and we will connect you with your Representative. Tell them to vote YES on the DREAM Act.