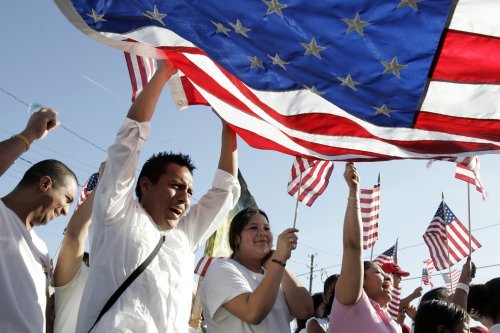 Earlier today I mentioned that the Congressional Hispanic Caucus met with President Obama to urge him to address comprehensive immigration reform this year. The President expressed a continued commitment to reforming immigration and also noted that his administration will be looking for ways to relieve the damage done to communities by current immigration enforcement measures.

“We came to the President today as allies and supporters, and in return he showed us that he remains committed to immigration reform that stabilizes our economy, secures our borders and keeps our families together. “The President showed the CHC that, although it is very early in his administration, he understands that for the immigrant community it’s the 11th hour, and there is no time to waste. The Latino community supported President Obama overwhelmingly in the election, and they remain energized not only by his victory but also by his message of support for comprehensive immigration reform. I believe that a plan is forthcoming, and that we will see real change this year.”

This is an extremely important step toward immigration reform happening this year and an energizing message for all of us who are pushing for it. It seems like the demand for reform is going to hit a critical mass in the near future, with so many different voices joining to call on the administration and Congress to address the issue.

FIRM’s parent organization, the Center for Community Change, also released a statement from our Executive Director, Deepak Bhargava. He had this to say about today’s meeting:

Today, we welcome President Obama’s pledge during the CHC meeting to start a national conversation on just and humane immigration reform. The Center looks forward to bringing the voices of those most affected to the conversation.

Our country, now more than ever, needs comprehensive immigration reform that gives the hard working men and women already here an earned path to citizenship, keeps families together and provides legal avenues for future workers to seek out opportunities here and join the struggle to strengthen our economy.

Its so important to remember that during this time of crisis in our country, we have to come together to solve then nation’s problems. Continuing the politics of divisiveness and exclusion will not foster the type of community solutions that we need. We need everyone’s contribution, both to the economy and to our communities, if we want to right the course of the nation.

It’s looking like today’s meeting is the first step to getting back on course.