Thousands Defend and Demand Their Rights in Arizona (Coverage Roundup) 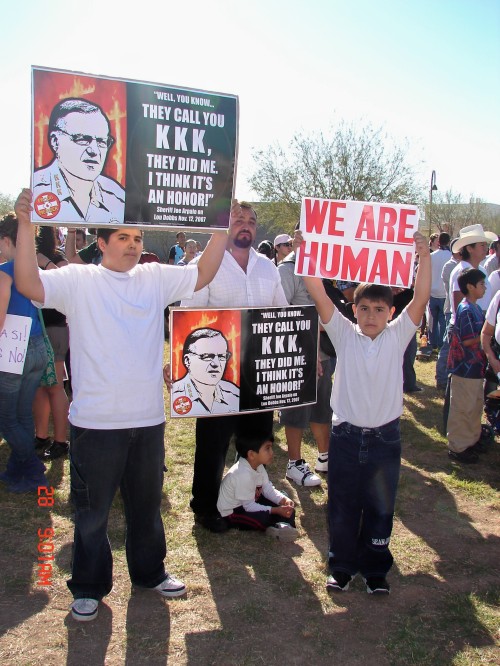 On Saturday, February 28th, one of FIRM’s lead organizers was on the ground in Phoenix, Arizona, marching alongside thousands of others, demanding justice for immigrants and an end to the authority of Sheriff Joe Arpaio. Here is his experience:

We were demanding that Sheriff Arpaio must go and with him the infamous 287(g) agreement, and a stop to the ICE raids.  But the march was more than that; it was the people’s way to demand justice and respect for all.

Over 8 thousand marchers walked 4 miles under in the hot sun; mothers with their small kids in strollers, fathers with their kids, elder folks, men and women, youth, latinos, whites, blacks, people of faith, and workers from different industries. All of these people turned out to show that human rights and immigrant rights are supported by the people of this country.   What a show of power it was!  On Saturday, our demands to stop the abuses against immigrants and their families were made in a powerful way.

At one point the police wanted to keep us on the sidewalk, away from the streets, but thanks to the hundreds of participants we won the streets!  Youth were asking as: “whose streets are these?”  And we all just took the streets over.  That’s how democracy really works; you push yourself all the way until you get what you want.  One more time, a peaceful, but massive demonstration can bring the power to change things. 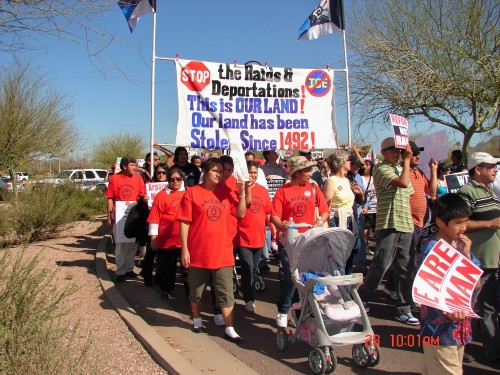 On Saturday, the sense that immigrant communities were afraid of Sherriff Arpaio was totally shattered.  The notion that we can defend and demand our rights was affirmed.  The march showed that the people in Phoenix, Arizona and throughout the country are tired of the abuse and impunity of authorities.

We marched, and we will continue to march until we assert our rights in this country. So, Sherriff Arpaio, you should take notice, you have been warned.

Keep reading for a roundup of media coverage of the march.