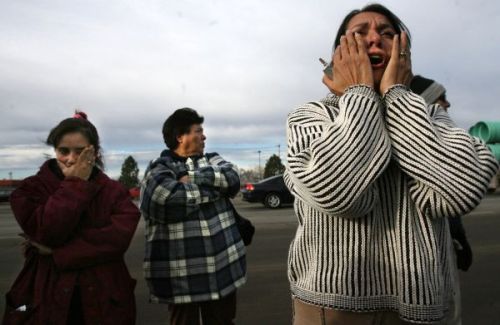 On Tuesday, the NY Times published an article about complaints that are being filed against ICE for excessive use of force and brutality during raids conducted in Florida in Novemeber.

“There is a way that these operations should be conducted,” said Jose Rodriguez, a lawyer with the American Civil Liberties Union of Miami-Dade County. “And this is not it.”

At a news conference, Mr. Rodriguez and others said agents had relied on vaguely worded warrants to invade people’s homes and arrest nearly anyone who looked Hispanic. In all, according to the federal agency, 77 illegal immigrants were detained in the operation, and only a handful appear to have been charged with a crime.

In the case involving the accusations of beatings, none of the men have been charged with sex trafficking. Lawyers working with the men said the agents used excessive force: bursting into their home in Homestead about 8:30 p.m., pulling their guns in front of a 4-year-old girl, then forcing all 10 or 11 men inside onto the floor in handcuffs.

This scenario sound eerily familiar to anyone else? Not only are raids systematically denying due process and tearing apart families and communities, they are excessive displays of force and police brutality. Remember my posts about the raid in Annapolis, Maryland earlier this year? This excessive use of SWAT-style force is something that happens over and over when ICE is involved.

Its good to see ICE being held accountable for their actions. The Agency has gone unchecked for too long. Let’s hope this marks a beginning of the end of their absolute power and free reign to bend the rules.